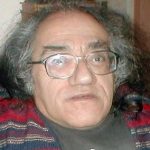 Nabil Shaban was born in Amman, Jordan. Disabled by the brittle bone disease ostogenesis imperfecta he was sent to England for medical care and grew up in as series of hospitals and residential homes, where he had minimal contact with his family and was expected to achieve little educationally. His struggle to gain an education took him to Hereward College where he met tutor Richard Tomlinson who introduced him to theatre. Following Nabil’s graduation from the University of Surrey they set up Graeae Theatre Company, the first disabled-led company in Britain and toured with Sideshow in 1981. Nabil left the company after this but continued on the Board and returned in the 1990s to appear as Volpone in Flesh Fly. His screen roles meanwhile included the role of the evil Sil in Doctor Who and the films Born of Fire (1983) and City of Joy (1992) and on stage major roles at the Royal Court Theatre and else. Since 2000. he has been based near Edinburgh where he has appeared in many productions at Theatre Workshop including co-devising D.A.R.E (Disabled Anarchists’ Revolutionary Enclave) and his own play The First to Go about the Nazis treatment of disabled people and has made a number of films including Morticia.

Theatre and the human condition

‘I believe most theatre is about life and about people. So if you’re doing Hamlet or Macbeth or whatever, it’s not the immediate physicality of the people that’s important, but what it’s saying about human condition, and about revenge, about jealousy, about aspirations, ambition, megalomania or whatever, or love. And those are things which affects everybody, you know, you can be a megalomaniac in a wheelchair. So if your aim is to tell those aspects of a story then it doesn’t matter how the person is dressed up, because it’s important that everybody knows that this applies to all of us – these attributes of human nature.’

The naming of Graeae Theatre Company