‘Ian Hinchcliffe born 1942, absurdist, artist and musician died by drowning in what he described as Justa Lake in Arkansas December 3rd 2010, doing what he probably loved most: fishing. 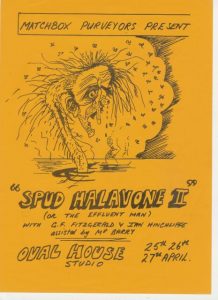 Hinchliffe was a performer who could bring a sense of menace, unpredictability and a surreal/absurd humour into any creative arena, unrivalled by any other artist of his time. He refused to be drawn into creative self-analysis and defining of a new art form which others had placed him in: Performance Art and now called Live Art. He was not interested in configuring an aesthetic for what he created-he DID IT and HE WAS IT: be it impromptu performances (UK, Europe and North America) in the street, on public transport systems, in social clubs, art centres/laboratories, theatres, summer festivals, pubs, once in a consecrated church and, God help us, even the odd art gallery!

As Hinchliffe often commented, ‘It’s not over when the gig ends’ – which Jeff Nuttall explained as meaning, ‘that a dark mischief had been ignited, which is not switched off with the spotlight and which may progress, with diabolic social manipulation to actual harm and danger.’ Hinchliffe hated the bland: life to him was an adventure and he pursued it with an insatiable and dangerous, playful delight with little distinction between on and off stage’.

This sense of childish play and humour along with his love of creating bizarre costumes and props had their roots in his youth in Huddersfield during the 1950s. His influences were Vaudeville, Music Hall, Northern comedy and traditional jazz. From these forms of entertainment he borrowed the mannerisms and gesticulations (the gurning of Frank Randle), the beautifully bizarre costumes and props and last but not least – the timing of the comic gag.

If you add into this mix ‘your life is art’, as demonstrated in its earliest form by the Dadaists – Craven, Rigaut and Vache – then you begin to see the man and the artist with more understanding. This influence entered his life in 1970 when he met Mark Long, one of the founding members of the People Show with Jeff Nuttall at the helm, and discovered the potency of Laura Gilbert’s monologues. It was Jeff though who became Hinchliffe’s mentor from there on. Hinchliffe began to combine the often absurd but creative dress and mannerisms of music hall comedy with the multi-media/experimental activities of the early People Shows and the Oval House Summer Workshops.

In the early 1970s he founded Matchbox Purveyors; a company of musicians, performers, poets and artists that could present a solo performance byhimself or a production designed by him that involved up to 20 artists: musicians, poets, actors and visual artists. The 1970s and ¹80s were his most creative years and the 1990s quiet after he suffered leg injuries from a mugging. His general health was not good but most of all, as he admitted to himself, he was not being invited to perform and had also lost the urge to do so. He continued with his cartoons, drawings and watercolours and these, along with his truly wondrous fishing diaries are yet to be published.

In 1997 Beaconsfield drew him out of this semi-obscurity and ‘Estate’, an exhibition bringing together his performance documentation, his imaginative and beautiful designed pamphlets, leaflets, brochures, posters and personal cards were displayed together for the first time. Ian also performed across six weeks his life from child to adult. Estate and these new performances – he never did a performance the same – moved to Chapter Arts Centre in Cardiff.  His last public performance was at New Territories – National Review of Live Art in 2010 in Glasgow. It was aptly entitled, Chubbin Mondays. These performances brought him a new and young public interested in a man who wanted to live life to the full, to celebrate and berate life by being both ABSURD and honest – well most of the time.’
[Roger Ely, June 2011]

A memorial event took place at the Beaconsfield gallery in Vauxhall on 2nd July 2011, celebrating the life and art of Ian Hinchliffe where some of the many great performers, artists, musicians, organisers, publishers and friends who were touched by his work made contributions.  The event also include a fully restored screening of the film ‘The Poppy Seed Affair’ from 1979 and other interviews and rare footage never seen before: www.beaconsfield.ltd.uk

Nola Rae sent us this:

In 1975 I was working with Alan Porter and Matthew Ridout in West Berlin in the tiny Reichskabaret Theatre.  The owner called himself Sweet Little Ernst and on meeting him, one of the first questions he asked us was: ‘Is your show was anything like The Hinchcliffe’s?’ Apparently he had done his best to destroy the theatre the week before. We assured him that our show was not performance art and that if we destroyed anything, it was mimed. It was Winter and bitterly cold and Hinchcliffe was on the lose in Berlin. He had bought himself a full length brown leather Gestapo coat that creaked. It also clanked with bottles of vodka he liked to keep in his pockets. He came to see us. We asked him why Sweet Little Ernst was so afraid of him. He said he had pulled the phone out of the wall and destroyed the piano which he played as part of his act. Why? He had sensed pretension in his audience and to him pretension was a cardinal sin.
He told me that he admired my work, apart from one clown piece called Fowl Play where I tried to get an egg out of stuffed chicken. He told me he had great difficulty keeping his seat during that piece, but out of respect he did. I was glad he hadn’t leaped on stage, but he was right, the piece was pretentious.
He was interviewed by British Forces Radio and when the interviewer indicated a piano in the corner of the studio, and asked if Hinchcliffe could give him a tune, Hinchcliffe went over and played it with his head. We saw him off from Berlin’s gloomy Hauptbarnhof . He pushed down the carriage window and leant out to wave.
As the train pulled out, steam rose up in front his window and when it cleared he had disappeared. What an exit!

I was part of the street theatre act Bob and Bob Jobbins in the early 1980’s and regularly witnessed the Ian Hinchcliffe phenomenon at work. At the Hat fair in Winchester I vividly recall him and his chum from Matchbox walking down the high street dressed as patients in vertical hospital beds. Ignoring the public they simply gossiped about the nurses, their illnesses and the poor state of the food. Classic British street theatre.

On another occasion I went to see him do a show in a small community hall in Portsmouth in which the janitor was (I’m told) one of the Schulman brothers.* The lights dimmed and the performance started with Ian taking a newspaper apart right of stage. Once achieved he set light to one sheet and threw it centre stage, and kept going like this with each successive sheet until the janitor came on and stopped the show. Must have lasted all of two minutes! Hilarious.

One last memory was of him breaking up a Forkbeard Fantasy sketch at a Hat Fair Cabaret due to a dispute with Jonathan Kaye (hat Fair Organiser and mime artist) over his excessive drinking. He came on the stage, dropped his trousers and threw his loose change into the audience whilst screaming obscenities at us all. At the time I couldn’t make up my mind whether this behaviour was ridiculously childish or a genius at work.

*The Schulman Brothers from Portsmouth made up most of the prog-rock band Gentle Giant, but I was told this brother was the one that had no musical talent.

If you knew Ian Hinchliffe and have particular memories of him or his work in this area(including possibly photos or flyers) that you would like to contribute, please contact us.  In 2017 his archive moved from Beaconsfield to QMUL where an event in November paid tribute to him. See here for more information