All Pam Gems plays are available to download online.

Born in Hampshire, Gems grew up in poverty with a single-parent mother before joining the WRNS and attending Manchester University as an ex-servicewoman. She began writing as a response to the isolation of bringing up children and in the 1970s moved to London where she encountered the new wave of feminism. She wrote the first feminist play to have a successful West End transfer in Dusa, Fish Stas and Vi (1976) which went to the Mayfair Theatre and dealt with four women sharing a flat. It had had its start though under the title Dead Fish, staged on the Edinburgh fringe above the Wax Museum, before moving to Hampstead under its new title. Prior to that Gems had had several plays staged on the fringe, which remain unpublished and under-recognised. Her first play Betty’s Wonderful Christmas (1971) was directed at the Cockpit by Roland Rees and was a dark fantasy for both children and adults. My Warren and After Birthday were two monologues staged at the Almost Free Theatre, dealing with different aspects of female sexuality. Their success led to Ed Berman’s agreement to stage a season of women’s plays at the Almost Free, later that year. The season included plays by Michelene Wandor, Sally Ordway, Jennifer Philips, Jane Wibberley and Dinah Brookes, as well as Gems’s The Amiable Courtship of Miz Venus and Wild Bill. 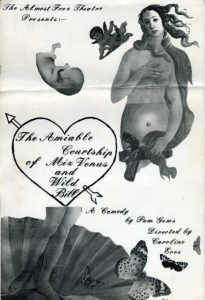 Fuelled by the energy of the new wave of feminism, the season led to the formation of two companies: the Women’s Theatre Group and the Woman’s Company, which was to become Monstrous Regiment, the former emphasising, as Gems said in an interview in 1992  a libertarian ‘Come one, come all’ attitude to include any woman who wanted to be involved, the latter the need of trained women theatre professionals for quality work which addressed women’s issues. Gems’ next work Go West Young Woman staged at the Roundhouse in 1974 also encountered the fierce arguments that fired the Women’s Liberation Movement in those years with ‘two interruptions by two separate militant feminist groups, objecting to the fact that we had men on stage’ Roland Rees discusses Gems’s first play and Sheila Allen speaks of playing the central role in Gems’s pivotal play Queen Christina (1977) for the RSC in their Unfinished Histories interviews. [Susan Croft 2011]

If you knew Pam Gems and have particular memories of her or her work in this area(including possibly photos or flyers) that you would like to contribute, please contact us.