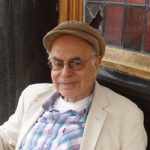 Michael Almaz was born in Tel Aviv and studied theatre in New York. In Tel Aviv he founded the troupe Zira (Arena), doing experimental and controversial work as director and writer including the play Across the Border dealing with Palestinian refugees. He moved to London in the early 1960s where he worked with the BBC World Service. His large-scale satirical shows Every Number Wins appeared at the Little Theatre, 1965 while The Rasputin Show, performed by Brighton Combination, 1968 was a major success. He continued to write plays including a series on 19th century revolutionaries, called The Anarchist Collection, several of them produced at the Pool Theatre, Edinburgh for which he also wrote a string of Lunchtime plays. In 1974  he founded the Artaud Company, named after the success of the one-man show Monsieur Artaud, written by Almaz. He then met Sally Willis who became his principal performer, for whom he wrote a series of one-woman shows, which toured all over Europe, starting with Memoirs of a Witch (1974), followed by Letters from K (1974), about Franz Kafka’s long-suffering fiancée, Story (1974) and Masoch (1975), about Wanda von Sacher Masoch, wife of the first ‘masochist’.  Meanwhile Almaz, with his wife Pam Martell, set up the London Cafe Theatre in Leicester Square in 1974,  where Intimacy,  based on a story by Jean Paul Sartre  became the longest running play on the London fringe, while Underground Man, (adapted from Dostoevsky) and Dialogue with a Dying Man (from De Sade), also had extensive runs. Michael died on Tuesday, 16th October 2012.

‘Mochtar was an Israeli, so I knew him from Israel. The woman is his wife, she is Scottish, and we decided to do a play together and I had the material for a play about Artaud so we did Artaud. We called ourselves the Artaud Theatre Company and we did the play. Now Artaud was a very complicated person, so he was good material. If you look at the script you’ll see that some lines are in capitals so they are emphasised, so yes, we did, we tried to do as much as possible in his style, now I didn’t have to explain a lot of his style because his character, his style of acting comes out beautifully out of his writings, we just followed his scripts, but some people thought we didn’t go far enough but in the theatre you can’t get away from controversy, can you?’

Detailed Topics List of topics covered in the interview.
See Viewing Interviews for details of where to view the whole interview.
See Michael Almaz video extracts for clips of him rehearsing Diary of a Rat, directing Hamlet and a Thames News broadcast about the Cafe Theatre at the Bear and Staff and listen to Tomek Borkowky audio talking about his meeting and work with Michael Almaz.

Bibliography
Published plays include:
Every Number Wins in The Best Short Plays 1968 ed. Stanley Richards, Philadelphia/ NY/ London: Chiltern Book Company, 1968
In the King’s Bosom: a Biblical Comedy in One Act, London/ NY: Evans Brothers Ltd, 1965
Kafka’s Judgement, London: Covent Garden Plays, 1987
Unpublished Plays include:
Across the Border
The Rasputin Show (1968)
Cut!
The Port Said Performance (later Royal Court, 1972)
The F&H Play (Traverse and Royal Court, 1974)
Smash Zed (based on the anti-semitic forgery the Protocols of the Elders of Zion)
Intimacy (based on a story by Jean Paul Sartre),
Underground Man, based on Dostoevsky
Dialogue with a Dying Man (adapted from the Marquis De Sade)
The Lord (and Master) in the Brothel (from Lautreamont)
The Anarchist Collection:
Anarchist (about Marx,  Nikolay Ogarev, Nechaev and Bakunin)
Sailor (about Emma Goldman’s arrival in the US)
Chicago Sunday School for Anarchists (about the so-called Chicago Haymarket Outrage)
The Friend (about George Sand and Marie Dorval)
Auto Auto
Dreyfus on Devil’s Island
Diary of a Rat
Letters from K (1974)
Memoirs of a Witch (1974)
Paper Tiger
Play Cocteau (adapted from Cocteau)
Eve
Cow in the Desert (on the trafficking of young Russian women to Middle East)
Other Writings include:
‘From Avant-Garde to National Theatre’ in The Jewish Quarterly vol 28, no 1 (Spring 1980)