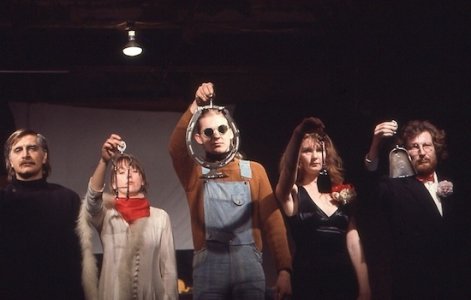 The Phantom Captain: What To Do On a Date

The first of our new regular monthly salons was a roaring success last week! We are now looking ahead to the next scheduled event on the 18th June. Check out our blog for details of discussions about future potential topics for the sessions but in the meantime we plan to get the ball rolling with a series of readings of plays and performance texts created by various alternative theatre companies.

Many fringe theatre productions during the 1960s-1980s were of significantly more than passing interest but got lost to view with the passage of time. In this series of events, directors and writers of the period will be invited to choose a play from their oeuvre that they think deserves another airing. Audience members will take part in a reading of the play (in its entirety or in extracts) and join in discussion with its writer/director. On other occasions we will choose a play or plays around a theme. If you are a writer or director with an idea for a play that you would like to read at a future session get in touch.
We kick off the series on Tuesday 18th June with
The Phantom Captain: What To Do On a Date
Originally performed in 1973, What to Do on a Date, was co-written by Neil Hornick, who will introduce the piece, and Joel Cutrara. This bizarre, Pirandellian show, billed as ‘A well-made play lovingly performed by well-made players’, is adapted from a Catholic pamphlet counselling American teenagers to exercise strict caution in their relationships. But the orthodox narrative frequently slips its moorings into libido-fuelled fantasy and melodrama. It’s also unusual in constituting a playfully self-reflective ‘lecture’ on the work of The Phantom Captain company itself.

Please come along, read a part, meet Neil Hornick and encounter this innovative and unjustly neglected company that started in 1970 and who often explained that ‘We want you to slip on the banana skin only to end up standing on your head eating the banana.’

The Phantom Captain was described in the Alternative Theatre Directory 1976 as:
‘Vision Mongers and Environ Mentalists. Our aim: recreation of the present. Our slogan: nonconformity for the masses. We demand a full explanation of everything, abject apologies, immediate recognition of the Phantom Captain, closer audience surveillance, legalisation of Indian music, an accidental breakthrough, and unconditional acceptance of our demands. We pledge: Phantom Captain flag days, love at first sight, drive-in swimming pools, a warp therapy tent on every street corner, fair police dog trials, rush-hour choreography, mental fitness displays, dial-a-peacock service, and preferential treatment for all’

Refreshments will be available during the session.
The event is free but you must RSVP as we need to know numbers.
Email confirmation or phone: 020 3659 5678 (please leave a contact mobile number)

And on 16th July:
Agit-Squat : Squatting and the Alternative Theatre Movement
including James Saunders’s Squat: a documentary about Grosvenor Road, Twickenham and Rough Theatre’s Squat Now While Stocks Last