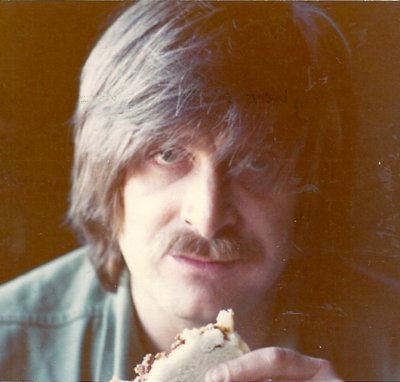 Joel was born in Chicago in 1936, the only son of August Cutrara, a Sicilian immigrant, and Betty Cutrara, a Polish-American clerical worker, who separated not long after Joel was born. Betty and her son changed addresses often, apparently to avoid being located by August. As a result, Joel once told me, he was unable to form any lasting childhood friendships. He did his time in National Service as a military policeman (ideal preparation for street theatre). Long interested in acting, he then trained for three years at the Goodman Memorial Theatre in Chicago, where his studies included Acting, Improvisation, Radio and TV. He joined the theatre’s resident company and gained some income from folk-singing and staging puppet operas – an expression of his long-standing love of music..

During the 1950s he worked in local radio as a staff announcer and, from 1962, in advertising agencies in the USA, UK and India. In London he met Sunita Nalwani (born in Lahore, Pakistan). They married in 1964, had two sons, Rafiq (b.1966) and Zia (b.1970); and in 1968 Joel became a partner in Longview Associates ad agency, handling a variety of accounts from surgical catgut to dog food, and writing blurbs for Penguin Books, poems, comedy routines and crank letters.

In 1971, Joel and I met at a party at the home of mutual friends, where we improvised lyrics to a live jazz band. The lyrics were execrable but we hit it off and Joel became my principal collaborator in The Phantom Captain (later also with Peter Godfrey), producing and touring a variety of bizarre/surreal mixed-media events that included stage plays, slide shows, mock lectures, street theatre, infiltrations, immersive ‘environ-mentals’, exhibitions and residential workshops, as well as ‘Write-Off’ publications.

In 1975, Joel decided to resign from his steady job with Longview to give his all as full-time artistic co-director of the unsteady, not to say utterly unbalanced, Phantom Captain. The company performed in a wide variety of venues and unusual outdoor locations. Our stage productions included Secretians, a nauticultural religious service; Loaded Questions, scripted entirely in questions; and The Changeness Congress, a musical about particle physics.
Ours was the first alternative theatre company to play Brixton Prison and the National Theatre. And one of our early productions, Kingdom Come: The Art and Craft of Pornography (1972) achieved the rare distinction of praise from both Men Only (‘Top marks!’) and the feminist publication, Spare Rib (‘a truly stimulating evening’).

We enjoyed collaborations with musicians and music groups, including Alberto y Lost Trios Paranoias, Mott the Hoople’s Morgan-Fisher (Miniatures and Claws), Salut d’Amour (Dutch all-ladies orchestra, at the Barbican Centre and the Dorchester Hotel), and a European tour with The Penguin Café Orchestra, for whose compositions Joel co-wrote and spoke enigmatic intros.

Along with 40 other companies, we lost our Arts Council grant in 1980 but continued to perform on and off. Joel diversified, working as a freelance computer trouble-shooter; as a bit-player in prestigious film and TV productions such as Reds, Ragtime, Insignificance, Who Framed Roger Rabbit? and Edge of Darkness; and as a distinctive voice artist, narrating Phil Mulloy’s award-winning Intolerance, a caustic animated film series (Channel 4, 2000-2004 – see YouTube). However, Joel suffered from periodic depression and ill-health and became increasingly reclusive, especially after the loss of his elder son, Rafiq. The last time I saw them both was in 1995.

Joel died in hospital of a lung infection on 2nd June, after a long illness and two damaging falls. He is survived by Sunita, from whom he’d been separated since 1978, his son Zia, and grandchildren Caiomhe (29), Yasmin (26) and Samir (13).

While there were those who didn’t appreciate Joel’s grosser tendencies (‘Always exceed the recommended dose’ was one of his maxims), he is remembered by most of his fellow-performers, friends and associates as a big personality with big appetites – a warm, witty, bawdy and highly creative agent provocateur with a soulful poetic streak and a keen sense of life’s intrinsic absurdity. In our fifteen-year, fun-filled collaboration we scarcely ever quarrelled. And to this day I cherish the slogan he dreamed up that convinced me he was the creative partner for me: ‘Legalize Indian Music Now!’

Apart from numerous photographs in the company’s archives, proof that Joel is not a mythic figment of my imagination can be seen in a collection of tributes [a selection of writings and pictures can be seen here] and two ACGB-sponsored films, Performance Art (1975, photographed by the young Roger Deakins) and The Phantom Captain Appears (1978), directed by friend and Phantom Captain regular, Ian Johnson.

See The Guardian Online for a shorter version of this obituary.