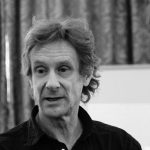 Chris Johnston was a writer, performer, director, teacher, and workshop facilitator who championed work in community-based theatre and improvisation. His work with Insight Arts Trust (1988-98) and then Rideout (1999-2016) pioneered a range of theatre and arts-based strategies for working with prisoners and those on probation. His experiments with ensemble work were realised in two companies, ESP and Fluxx. Particularly with Fluxx he developed Citizen Theatre – improvised performances that explored issues of concern to local communities. A further company, Livestock, was established in Brighton more recently with a focus on arts and education.

He was a visiting lecturer at the University of Warwick between 1998 and 2003, and between 2003 and 2006 he was an AHRC Fellow in Creative & Performing Arts. He was awarded a Butler Trust Award in 2005 for his work in the Prison Service and made a Companion of LIPA in 2011. He was an active member of the National Alliance for Arts in Criminal Justice.  His writings for Nick Hern Books included House of Games (1998), The Improvisation Game (2006) and Drama Games for Those Who Like to Say No (2010). He also curated, with Rideout, a series of online conversations called The Argument Room on the arts and social justice, including three in conjunction with Unfinished Histories in 2013. His final book Disobedient Theatre is due out in late 2017. Chris died of pancreatic cancer on Monday 23 January 2017, aged 65.

Susan Croft writes:
‘My own connection with Chris Johnston came through the publication he started in 1986 The Plot, the newspaper on alternative theatre. It may have only lasted for five issues but it was not for want of Chris’s energy, hard work and commitment and, for a young aspiring writer like myself, he was both highly encouraging and helpfully tough in his searching criticisms, with a fierce intellect, a dry wit and great humanity. In later years he was someone whose name often cropped up in new contexts where I would wonder ‘Is that the same Chris?’ doing some other new and vital theatre work with a socially-excluded group. It always was’.
It is planned to hold a celebration of his life and work later this year, if possible to coincide with the publication of his latest book .