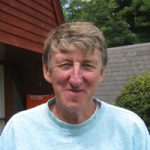 Mick Banks’ artistic career operates at the point where art and theatre intersect. His early performance career emerged from his sculptural practice, and, when, as a student, he met Al Beach, who had already left college, they began to make collaborative performance work drawing on installation and assemblage. Working with images and objects found in the sites and scrap heaps of 1970s Yorkshire, Banks set up an Arts Lab with Al Beach in Halifax, and, in 1971, founded John Bull Puncture Repair Kit. Always self-defined as artists and not as theatre-makers, JBPRK nevertheless created large-scale performance events. Pyrotechnics were accompanied by startling visuals — arriving at one gig in a fire engine — and once, abseiling down buildings in London during a show. Banks’ collaborative work used ingenuity and improvisation, responding to whatever materials came to hand. A litany of shows includes episodes with exploding jelly, rain on stage, a four-poster bed and a huge heap of secondhand clothes. That series of shows ended in 1976. The tensions of making and touring had taken their toll, and Banks and his partner Corinne D’Cruz travelled to Australia, and then back to the UK, where they set up their company, British Events. For 25 years, from the late 80s they were based in Germany, where their work was well received and they were better geographically placed for touring in Europe. More recently they returned to live in England, where they are making new environmentally-based work at the place where the land meets the sea.

For further details and images of John Bull Puncture Repair Kit work visit the company page. Below are some extracts from Mick Banks’s interview – a full account of the topics covered in his interview can be accessed at Mick Banks Topic List  page.

‘While I was still at college I went up to Yorkshire on several occasions to work with Al [Beach], and we did several installations together, notably at the Calder Valley Arts Festival in Halifax, and in one or two other places as well. Both Al and myself were interested in the work of people like Ed Kienholz. He’d had a major exhibition at the ICA in the late 60s, and he had been lumped in with the sort of Pop Artists, but he was very much…he was really outside that tradition. He was quite an extraordinary guy; he produced tableaux, which were formed – assemblages really – from all kinds of found objects. His most famous work is called Barney’s Beanery and that is a bar in New York which he recreated and filled with customers, except that the customers have clocks instead of heads. It’s one of his most well-known pieces; and he also did a whole range of assemblages and tableaux, such as Back Street Dodge, Visions of Sugar Plums, and all of these were brought to the ICA and shown in the late 60s to an audience that had never seen anything like that before. He had a strange way of unifying everything, which was to cover it all in a kind of grey gunk, which he painted on at random all over these tableaux, and it kind of gave them a kind of unity; and he was extremely influential. And we were both admirers of his work; so the first things we did were kind of assemblages using metal and found objects, also using colour as well. And that became a sort of unifying feature in a lot of John Bull work. Colour was an important component in what we did. That was one of our influences; another guy who we admired, was the man who did the Watts Towers. He was an Italian immigrant who built over a period of years a series of towers in Los Angeles, again using anything that he could find, detritus. He was a completely untrained artist, and the towers had no function whatsoever other than being decorative. He was one of our heroes really.’