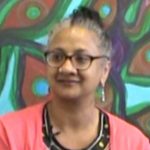 Poulomi Desai (1966-) is a Hackney-born queer multimedia artist of South Asian descent who founded the Hounslow Arts Co-Op [HAC) and works in many forms. Encouraged by parents supportive of arts education, Desai explored the intersections of art and politics starting in her adolescence. She pushed beyond the curriculum of local schools in Harrow, where she lived after her parents divorced. Desai founded HAC at age fourteen, and used it as a springboard for collaborating to create live arts work, street theatre, improvisation, stand up, concerts, and zines. She performed with Street 7 and Double Edged Theatre in the 1980s, and found inspiration in Red Ladder, Live Art Development Agency, Complicite and work she was watching at Riverside Studios and the ICA as well as what she was seeing from bands and at clubs. In 1987, Desai formed Shakti, the first South Asian LGBTTQ organization in Europe, with Sivananda Kahn. She worked as a Racial Equality officer in Ealing for four years. Her work traverses the spaces of community social service, art, and activism, and she now creates video, digital, and installation work alongside her performance as a musician. Her recent project ‘We are the Lions’ was an installation exhibition about the Grunwick Strike led by South Asian women from 1976-1978.

‘We all had different loves and passions and interests. So I think for Parv [Bancil]…he learnt writing through being in HAC and also through getting mentors over the years, but he was literally self-taught. But he had been a DJ and he brought his own musical ideas, musical ideas about what that music meant and its context in wider society, so he had his own ideas. If you asked Rav [Gill] about the 70s, he’d talk about- it was amazing you know, from Star Trek to Sci-fi to all sorts, so he had a very different experience to me and his references are different. For Rav it was science fiction and its relationship to theatre and performance, the processes within theatre, traditional, contemporary – how they relate to cinema as well. Mine was more influenced, I suppose, by Live Art. Hardial [Rai], I think, had more of an infinity, an analysis to look at both traditional theatre from India, practices, and to see how we could use some of those, cos there’s particular characters that we could use, and how we could use that and how it’d relate without having to do a particular production. There were current playwrights that Hardial was looking at, to looking at Japanese practices, as well of contemporary theatre. So it was thinking about the body, the character…we could never, ever, do necessarily just pure aesthetics cos we were always aware of how we [British Asians] were described and journalists out there had no idea how to write about us.’

Watermans as a base for HAC (Hounslow Arts Co-op)