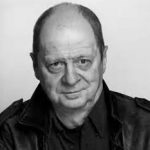 This memory was sent to us by Ian Giles:

‘So sad to hear about the recent passing of Paddy Fletcher. I too first saw him in my first term at university but in my case it was at Sussex in John Abulafia‘s extraordinary and pre-Berkoff adaptation of Kafka’s ‘Metamorphosis’. Paddy was terrific as Joseph K in a production that still ranks alongside Peter Brook’s ‘Dream’ as two of the best pieces of theatre that I have ever experienced. Incubus was originally formed (in 1968, I think) by ex-students of the University of Sussex and (what were then) Brighton Art College and Brighton College of Education. I joined the company the following year and have fond memories of rehearsing four short plays with Paddy, John and Shell Abulafia, Mike Prescott and the other founder members for the ’69 Edinburgh Fringe. After that things started to really happen for the company – gigs in London and BBC 2 filming that year’s showpiece ‘Brain’ (which I was in) – so I had to leave as I still had two years of my degree to complete. It was a great time.
But this is not about me, it’s about Paddy. Thanks for everything, old mate. I learned a lot from you. Keep on trucking, wherever you are.’

Paddy Fletcher’s interview:
Below is an outline of the topics covered in our interview with Paddy Fletcher in 2013, recorded to assist with the construction of the Incubus company webpage.

Interview content includes: Paddy Fletcher (PF) began as an actor with Incubus where first two shows were directed by John Abulafia (JA). Very late 60s. Group came together as students at Brighton Arts college taking two shows to the NUS drama festival – Metamorphosis and The Amazing Harold by PF. JA left and handed company over to PF who became its Artistic Director and really pulled the company together. Wanted to entertain people. Time when fringe was beginning to boom. Took 3 or 4 productions to really get into their stride. Arts Council funding from around 5th production. Company drawn from friends, borrowing from other companies and ads in Time Out. Some people stayed a long time, others just for one show. Experimented trying different modes of performing, developing work. Based at Oval House, blossomed under Peter Oliver’s ‘right to fail’ policy. Built up a strong touring circuit – colleges, art centres, festivals, Oval House. Feast of Fools  – very successful event at Oval House with Peter Oliver and other companies. Originally for 3 nights and brought back for a week or two weeks. Asked to take it on to Roundhouse. Work based on dark humour. Probably would be more successful now. PF loved touring, getting out of the van, doing a show, then moving on to next place – all he ever wanted. Used a solid core of people. Lots of work in Holland – one month of each year. Also some work in Switzerland, Germany and France. Gradually added more music and band work into shows. Energy of work drawn for their out door work. Description and examples of some of their outdoor festival and street work where they assumed characters and would improvise in character over a period of 3 days sometimes. Some info and description of their site-specific work at Oval House and de Lantaren, Holland. Old Testament Floor Show – set in a nuclear fall out shelter. Popular in East Anglia, Scotland and West Country. Not so in London where the work was perceived as not serious, sexist and racist. Some of sexism accusations probably correct, ‘but you learn’. Would probably get away with some of the stuff now. In the last year  of Incubus, PF, through exhaustion of running company and realising he had only ever acted in his own shows, took work acting with ATC [Actors Touring Company] and let other directors lead Incubus work. Arts Council began questioning their work. PF was enjoying his other work so let Incubus go which was fine at the time but the loss hit him a year later.

They go through some production photos which PF comments on:

PF always interested in history and how it affects us now, mashing together different time periods. Recently written an adaptation of the Hunchback of Notre Dame being produced in York.