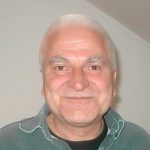 Chris Montag was born in Germany and trained at Barnet School of Art in environmental design. On leaving he set up Big Sister, a creative outlet for graphics and writing with John Wells. This eventually grew into Oval Print Shop. He then ran it with Alan Courtney from Rye Express (a south London-based political print shop which later became all-women) and it became a co-operative and chapel of the National Graphics Association and worked increasingly for Left-based organisations, law centres, action groups and with other community presses including Black Rose and Union Place. They also produced publicity for Oval House and numerous alternative theatre groups, later moving into publishing, including the underground magazine South Circular, and running community workshops in photography and silkscreen, operating from a mobile bus. He went on to work as a freelance graphic designer. He moved to Bristol in 1990 and taught graphic design at Brunel College. Since retiring he has worked as a furniture-maker.

‘We did kind of print workshops. We taught people how to produce very cheaply, small pamphlets and small publicity themselves – those who couldn’t afford to get it done. I ran some photography workshops, mainly for women. At that time there were a lot of women who wanted to do their own photography. So I specifically ran a woman’s photography workshop – nights, in the evenings once a week. We had exhibitions. A couple of people actually went on to become photographers from it.’