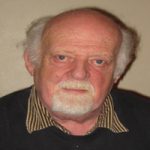 Roland was a founding member of theatre group Cartoon Archetypical Slogan Theatre (CAST), formed in 1965. Prior to this he had taken a stage management course at Bristol Old Vic, where he met his future wife Claire Burnley. They moved to London and joined the Unity Theatre as stage managers, which was controlled by the Communist Party of Great Britain. They formed a theatre group with Ray Levine and David Hatton. Roland was then expelled from Unity Theatre for dissident reasons. The group was later joined by Red Saunders and became CAST. Roland began teaching at the Working Men’s College in Camden Town, and the rest of the group became the class. After leaving they produced a series of short left-wing plays with the recurring character of Muggins. Notable early works included Mr Oligarchy’s Circus (1966) and a collaboration with John Arden and Margaretta D’Arcy Harold Muggins Is a Martyr (1968). The original group split in 1971/2 and those that left formed Kartoon Klowns. The play Sam the Man (1975-77), which explored the Labour Party since 1945, was a success and instrumental in them gaining an Arts Council grant in 1976. Another key work in this period was the Confessions of a Socialist (1978). This was later developed into a solo show, Full Confessions of a Socialist, which was taken to America. In 1980 Roland won an Off-Broadway Theatre Award (aka an OBIE) for the play. The Arts Council grant ended in 1985, which marked diversion of  CAST away from producing their own plays. However, they had been producing CAST New Variety nights since the early 1980s. With the end of the Arts Council grant, these became CAST’s main focus, and they took over the Hackney Empire. They supported and nurtured comedians who became key players in the alternative comedy movement. Roland remained at the Empire until 2005. He is still active with CAST in the production of comedy nights.

For more images see the CAST company page.
You can find information about the topics covered in Roland’s interview by visiting his Topics List page.

Time at Unity Theatre
‘And then I worked on a building site in London and someone said, ‘Well you know all this, so why don’t you go along to the Left Wing Unity Theatre?’ And as soon as I went in they jumped on me because I knew something as a technician. And we were quite high up within Unity Theatre in no time at all ‘cos we were technicians. Claire joined me and we formed a group around ourselves. It was a wonderful theatre, Unity, because partly they were Communists, like real working-class Communists – often Jewish – and it was great to be with them. They wrote…well I mean Lionel Bart’d just been there and written musicals and things for them. Great people were there, you know, and we were a part of it and this wonderful feeling of it all. And then we began to realise that the Communist Party really dictated what should go on there. And at that time they were very concerned, the Communist Party, with their image, because there’d been the Hungarian uprising and there’d been all sorts of things. They had a folk club in the bar, and we said, ‘Why don’t you put some Bob Dylan on instead of Pete Seeger every now and again, on a record? and they said, ‘No, Pete Seeger was a member of the party, Bob Dylan never was!’ ‘Yeah, but Bob Dylan wrote the songs…’ ‘Doesn’t matter, Pete Seeger’s singing them’ – you know, kind of like this rigid view of everything through the Party eyes. So we formed our own theatre group, and then eventually some people who’d been at Unity tried to transform it and change it; and there’d been a big popular meeting which we went along to. But because by that time I was also on the management committee, without knowing, I’d actually gone against the rules of having a meeting outside of the meeting. There were people who had all been at the theatre and they were fed up with the rigidity of the Party, the Communist Party’s view of what should be on or not. I remember going to meetings where they said, ‘Don’t mention Sean O’Casey, he ratted on us.’ And it was all like that. ‘Bertolt Brecht, we introduced him to Britain so we can do him if we want’. We said, ‘Well look,  there’s a huge movement outside of people who had – CND and young people who were volatile…’- they weren’t attracted, it couldn’t get to them because they were stuck with what was proper. Or people who were in opposition shut up. So all of a sudden there were these new group of people who’d been members before and who were very active and wanted change. And we’d sort of said, ‘Oh yeah, we’ll go along with that.’ Lo and behold, they chose me to be expelled, out of all of this. And one of the people at one of these meetings said that they knew Brian Epstein, maybe he’d be interested. And I remember thinking, I’ve never been interested in Brian Epstein really. But nevertheless, when the charge sheet was written out at a big mass meeting that we went to, it was that we were trying to sell the theatre to Brian Epstein. And it was kind of a trial; it was really good because we were being tried by a sort of Communist Party trial!’