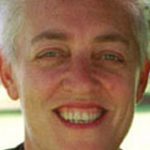 Ruth Mackenzie studied at Cambridge University and went on to co-found Moving Parts, a socialist feminist company performing in youth centres for whom she wrote several plays. She has been New Writing Officer at the Arts Council, Chief Executive of Nottingham Playhouse, and general director of Scottish Opera. More recently she was executive director at Chichester Festival Theatre and then the Manchester International Festival. She is Expert Adviser to the Secretary of State for Culture, Media and Sport and Consultant Dramaturg for the Vienna festival. She is a strong supporter of initiatives to get women into positions of cultural leadership. In 2010 she was appointed as Director of London 2010 Cultural Olympiad.

‘And we would get young women, and sometimes boys, but more often women, tracking us, following us. They’d follow us from one youth club to another, especially in rural areas. I think we had a huge impact actually. We worked exclusively in deprived areas. I mean we were working with issues of social exclusion before anyone was using that phrase. All of our work that I recall was in the youth club in the street-that-has-no-name, on the estate-that-isn’t-on-the-map, where actually it’s really, really bleak, and the young people were fantastic, I have just nothing but happy memories of these young people. We were taking culturally diverse companies into areas sometimes of extreme racial tension… places where working, white, sort of, enclaves could be really tough, and of course the boys were always struck by the dominance of the women’s roles in this company.’

Challenging definitions at the Arts Council