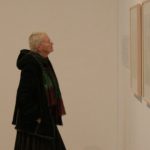 Mary Turner’s work is indelibly linked to that of Action Space which she co-founded in 1968 with Ken Turner and Alan Nisbet. Together they were looking for a radical alternative to the growing hierarchy of the private gallery system and its dealers. They were interested in finding new avenues of artistic expression through creative play with interdisciplinary, socially-engaged practice at its heart. Inflatable structures became key tools for public engagement and direct action. Early on they were invited by Joan Littlewood to participate in the City of London Festival, focusing on public participation in the arts. Their interactive structure The Plastic Garden built for the Festival provided them with a showcase which led to an Arts Council grant. In 1971 Camden Borough provided them with a 3 story workspace in a derelict factory in Harmood Street. There they developed a range of projects which were staged in neighbourhood festivals and public spaces throughout London. Students and others who worked with them lived in nearby squats – sometimes the squats were ‘licenced’, sometimes not. In 1975 Action Space were offered space at the Drill Hall in Chenies Street where they continued their work of running community-based projects, events and tours involving children, people with disabilities, local communities, students and many others. After financial difficulties in 1980, the company was split into three: the Drill Hall as a venue, Action Space London Events for the children’s and disability work, and Action Space Mobile for the touring performances and residencies. A few years later Action Space Mobile moved to Sheffield, led by Mary, and in time the company established its base in Barnsley continuing its work through a wide range of creative arts workshops using a diverse group of professionally trained artists whose skills included visual arts, craft, movement, dance, music, storytelling, puppetry, film and digital projections until 2015. The archive of Action Space – ‘Action Space Extended’ – was put together by Mary Turner and others in order to enable the production of her book of the same title, which was published in November 2012.

For more images see the Action Space web page
You can get information about the topics covered in her interview by visiting her Topics List page.

First base in Harmood Street

‘So we looked around and found, in Kentish Town, an old factory that needed renovation, and it took us quite a bit of time to renovate it. But that gave us three floors of studio space; as I say, we could actually invite public in to our spaces, we could build big structures and we had storage. And extra, spare space we used as a free school for kids to start with, until it was burnt down, and a sound studio for Mike Westbrook. People, students who came to work with us, and came from all over the place, started off by being put up in our flat but we couldn’t have that all the time because it wasn’t big enough for that, really, and so we started looking for houses that could be squatted, because there was a lot of empty property in Harmood Street, and so finally we had about 3 or 4 houses in that road full of people who were working for us, which made it possible. We offered people, not a salary, but a lunch and a room to work in, and then money when we went out on things that paid us – local authorities, particularly supported by Camden. And, we also did work, still did some work in Tower Hamlets, because we’d started in Wapping, and Notting Hill Gate we worked in, worked in the Oval House. We worked, well, wherever, and people came with ideas of where they wanted to work, so sometimes we just went and used streets, and we had a commission in Camden to not be arrested.’