Many of you I am sure will have crossed paths, socially or professionally, with Ags Irwin who died far too early on May 6th this year, not long after her 72nd birthday. Most theatre company histories are told through the names of their players, directors and designers but Ags, through her imaginative and fervent administrative, fundraising, managerial and producer roles, played an equally influential part in the successes of those she worked with – Gay Sweatshop,  Monstrous Regiment, Theatre Centre, Pascal Theatre Company, Disability Arts Forum among others – and it is good and right to remember the positive contribution she made to them and the industry at large. She worked hard and played hard, liked a good party but was equally happy pottering in her small back garden and entertaining friends.

Richards Sandells captures Ags beautifully for us in the following personal reflection: 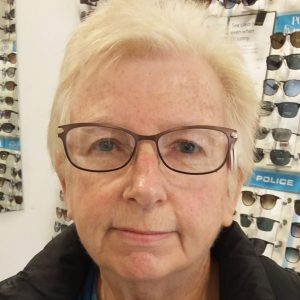 ‘I joined Gay Sweatshop at the end of 1984, cast in a production of Noel Greig’s Poppies which toured the UK in the Spring of 1985. Later that same year I was asked to be in a staged reading of Andy Kirkby’s Compromised Immunity – the first British play about AIDS – as part of the company’s ‘Times 10’ festival to showcase and celebrate the voices of new gay theatre writers, performers and artists. Gay Sweatshop subsequently decided to produce Compromised Immunity and with the support of public donations and a small grant from GLAA it finally had a short and we’ll received run in the summer of 1986 at the Albany Empire. On the back of the critical reception it received at the Albany, the Arts Council agreed to project fund a full national tour in 1987.

And so it was that I came to meet Ags.

We spent the dark cold early months of that year holed up together in the cramped gloomy and damp basement of Noel’s flat in West Hampstead – Gay Sweatshop’s ‘office’ – sat side by side at a trestle table, each with a phone (dial up – no push buttons!) fan heaters rumbling at our feet, surrounded by filing cabinets, a photocopier, word processor, books of contacts, ring folders and box files. Ags’ handsome (and huge) dog Max curled up at our feet.

Ags was fundraising for the company and setting up a new ‘friends’ scheme (eventually to be christened ‘POSH’ – for ‘Pals of Sweatshop’). Meanwhile, as a new member of the company’s six strong management collective, I was busily booking the tour of ‘Compromised Immunity’.

We were both feeling slightly out of our depth I think, and always on the verge of hysteria. Ags on her phone trying to charm famous gay theatre folk into becoming patrons of ‘POSH’; me on mine getting into deep water negotiating with venue bookers.

At one point the now famous activist photographer Sunil Gupta was meeting Noel and we came up with the (not very radical) idea of him taking a photo of Ags and I in the basement, with the lovely Max sandwiched between us, to grace the cover of a new leaflet publicising POSH with the rather wince making caption “Gay Sweatshop: we’re appealing”. The cheesy concept was thankfully vetoed politely by others on the company management, but the photo was sweet and we each kept our copy on display at home in the decades that followed.

In the end, after an unusually yet suitably posh launch with champagne and finger buffet at the Oval House – arranged and expertly managed by Ags – her new friends scheme was judged a success and for the years it ran, it provided a useful and regular new income stream for a company that few realised existed on the edge of a project funding precipice.

Personally we hit it off instantly. We each learned from the other about our differing experiences of the gay community – separated by gender and generation, sexual experiences and the very different ‘scenes’ we inhabited, yet united in commitment to an ideal of liberation, inclusiveness and community. And a love of dogs. And dirty jokes.

Our friendship lasted 35 years. We holidayed together, shared endless picnics together, drank too much, protested and campaigned together. We eventually sailed into stormy waters that at one stage seemed set to overwhelm our friendship. But reminded by the shock of her reaching her 70th birthday and, within a month of that milestone, losing our friend and mentor Philip (Osment) we realised that – as she wrote to me after his funeral; “we are family: we go back”. And of course, she was right.

Two days before she died, I remarked on her impressively large aloe vera and told her it would be the envy of her neighbours. She grinned in appreciation of the innuendo and gave me the finger. Defying the rules we’ve all grown accustomed to, I took her hand as I left and she squeezed it. In the end; love wins.’

A long-term Kilburn resident Ags was deeply involved with the local community both as organiser and participant. She was also a gifted writer as seen in her recent poems, recorded online for Pascal Theatre Company’s Giving Voice – https://www.pascal-theatre.com/giving-voice/ags-irwin/  and KOVE’s (Kilburn’s Older Voices Exchange) Lockdown Pie – https://www.annachaplaincy.org.uk/post/lockdown-pie