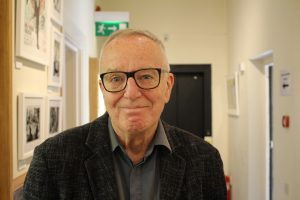 My brother John Turner, community theatre actor, playwright and director, songwriter and rock singer, died suddenly at the age of 75 on 15 November 2021. John was the elder of two brothers born to Hilda Turner, who worked for many years as a shop manager, and Matthew Turner, an engineering supervisor originally from Gateshead, Co. Durham. Both boys grew up in Hilda’s home town of Slough, Berkshire, where they attended the local technical school. It was there, under the aegis of Tom Barnes, our inspirational head of English, where John gained his lifelong passion for the theatre, playing lead roles like Becket in T.S. Eliot’s Murder in the Cathedral, and Francois Villon in ‘The Other Heart’. Tom Barnes even got this play’s author, James Forsyth, to attend rehearsals and advise the young cast. John was hooked.

In 1968 John graduated from Nottingham University with a degree in history. By then he had also performed in several University stage productions, and he was determined to develop a career in the theatre. He joined the Brighton Combination, a not-for-profit collective which aimed to introduce theatre to ‘a different demographic, different audience, younger people’ [Jenny Harris, John’s lifelong partner, who died in 2012]. 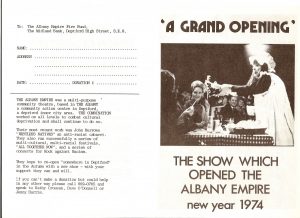 In 1972 the company moved to Deptford in East London to become part of the Albany Empire as The Combination at The Albany. The Combination’s first show – ‘Watch it All Come Down’ – chronicled the ravages of ruthless urban redevelopment on working class communities, and struck a chord across the country during its tour. He went onto write and direct All Who Sail In Her, Beggars Can’t Be Choosers, Heroes, Race with the Devil and Blood Sugar.

As the Albany’s Artistic Director John worked with many big local musicians like Squeeze, Dire Straits, The Flying Pickets and Elvis Costello. In the late 70’s he formed the band Rubber Johnny in the wake of a wave of violence by nazi skinheads around East London. In 1978 the original Albany Empire was burnt down because of its support for Rock against Racism. Rubber Johnny performed to help support the rebuilding of the Albany, which was open for business three months later. Song titles like ‘Launderette, ‘Allnighter‘, ‘Fruitmachine‘ ‘Guernica’ and the 1980 vinyl masterpiece ‘Nicotine‘, give a flavour of his idiosyncratic songwriting style. 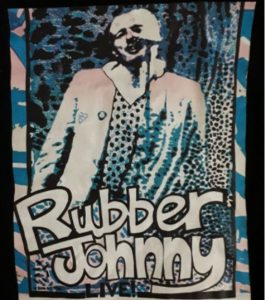 His public profile perhaps peaked with his remarkable performance in the 1980 film MacVicar, starring Roger Daltrey. John’s performance as Panda, a moronic, shuffling old lag banged up in Durham Jail, was in sharp contrast to the quick-witted and strong-willed characters leading the prison riot. He also performed on TV.

Back on the theatre stage, in 1982 John developed the storyline from a track off Squeeze’s ‘East Side Story’ album into a stage production for the Albany. The play, ‘Labelled with Love’, is set in a smoky Deptford pub threatened with conversion into a disco cocktail bar, its central character an elderly widow suffering translocation and loneliness on her return to London from the States.  Transfer to the West End was mooted, but John insisted on using the original cast in their original roles, and the promoters backed out.  Jenny and John both left the Combination in 1985; Jenny to work in the National Theatre’s Education Department, and John to work with Circus Senso, which developed from a circus training course Jenny had been running following a six month sabbatical researching new developments in circus. John directed Circus Senso for the Greater London Council Farewell Festival in March 1986 in a little big top at the South Bank Centre, and subsequently produced a show for Christmas 1987 at the Hackney Empire. A particular strength of Circus Senso was its strong and cohesive (if very 1980s) visual style, with great costumes, make-up and hair styling.

In 1989 John was appointed Artistic Director at The Half Moon Theatre in Mile End Road, where, among other productions, he directed Circus Moon, a human circus Christmas show set to a jazz funk score.

Funding problems cut short his work at the Half Moon, and he returned to a more ad hoc role as a writer and director, as well as teaching Theatre Studies to a new generation at Rose Bruford and Lewisham Colleges.

2006 saw the production of Deptford Stories which he wrote and directed. An ambitious celebration of the local community and its changing fortunes since the time of Queen Victoria’s reign, it involved a cast of over 100 people performing in the streets of Deptford and at the Albany, and included individuals and schools. Integral to the development of the performance was the collection of oral history interviews from local people. It also led to the creation of a documentary film about the making of Deptford Stories, as well as the development of resource packs for local schools about the history of the Albany.

His voice will stay with us for a while yet.