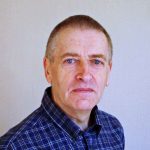 David Cleall was born in London and grew up in the North-East of England. He trained as a photographer with the Ministry of Defence at Bedford and regularly visited the New Arts Lab, Robert Street, and Oval House in the early 70s where he saw many of the emerging alternative theatre companies such as The People Show, Brighton Combination, Moving Being, The Other Company (Inter-Action) and Roland Miller and Shirley Cameron. Later he taught Drama and Film & Media Studies – first in secondary schools and then in further education in East London.  In the late 70s the ICA and the Roundhouse provided memorable experiences with Pip Simmons Theatre Group, The Lindsay Kemp Company and international companies such as The Living Theatre and Le Grand Magic Circus. David has researched and compiled an on-line catalogue raisonné of the artist William Roberts (1895-1980).

Offending The Audience [Peter Handke]
‘I think one of the finest shows that I saw at the time was by The Other Company [TOC, an Inter-Action company led by Naftali Yavin] – the show I saw was Offending The Audience, the Handke, which again had gone through [various venues]…I think a mark of it’s success, it had played the National Students Drama Festival, I think it was premiered at the Oval in their Ambiance Lunch-time Theatre, when Ambiance were out of…had lost their home. So the Ambiance closed [the Ambiance began at No 1 Queensway. When it closed there for a time it was ‘in Exile’, appearing at the Green Banana Club, ICA and Oval House before finally settling at the Almost Free Theatre, Rupert Street] and then it spent a time at the ICA, it spent a time at Oval, and a time at Cockpit. And I think under those auspices they showed something that was called at that time Insulting The Audience; but eventually they put it in to the 8 o’clock weekend slot at Oval House, and that was a superb production. I loved the text, and again it was kind of interrogating these ideas about audience and conventionality, and of course we loved everything that was anti-bourgeois, anti-middle class, so these kind of attacks on theatre were attacks on middle class values and so on, we loved all that at that time. It was just breath-taking, the performance of the four actors –  there were two male, two female – who had this text that was completely undivided up in terms of actors, it just comes out as a great torrent of words. The cleverness with which they’d take a line and make you really think by acting out what it’s [meaning, or the opposite of its meaning] you know, they might say, ‘We will not take a theatrical breath at this point’, and then they would, and then, ‘We won’t blink our eyes’ and then they held their eyes and kind of…they had you absolutely in the palm of their hand, so, it was really riveting. The Oval, in my mind, and of course I’m going back so many years it’s probably all completely wrong, but I remember a really plush velvet curtain for some reason that had been [brought] in – there were two spaces at the Oval Theatre and I think this space was like a gymnasium or something like that, but in my mind it could’ve been in the Theatre Royal Drury Lane or something; they’d made – because it [the piece] really needs the conventions of theatre [operating] in order to kind of break them. And I seem to remember this really plush curtain being eventually [opened] when the actors come in, stand in front of it with absolutely no props, no scenery, no lighting even – I think the [house] lights came up –then [they] delivered this absolutely superbly directed, choreographed performed piece.’

Links:
David Cleall’s research on William Roberts, 1895-1980 can be accessed at An English Cubist
For information on the New Arts Lab Cinema see Biddy Peppin and David Curtis on Vimeo