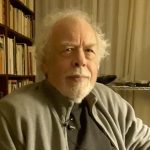 Born in the Netherlands in 1940, Ruud ‘Rudy’ Engelander’s theatre work has embraced that of writer, dramaturg, actor, director and manager.  Early work included Secretary General for the International Student Theatre Union and theatre critic with the weekly De Groene, Amsterdammer. Whilst at Amsterdam University, Paul Binnerts and he set up a couple of theatre festivals which brought UK companies such as CAST, Bradford Art College Theatre Group and Open Theatre there. He worked with the Mickery Theatre, Amsterdam and with Pip Simmons Theatre Group  on a number of productions including: Dracula and An Die Musik. Rudy also worked on Schauspielhaus Bochum’s production Das erste Baader-Meinhof-Stück.  He went on to work as a dramaturg with Amsterdam-based Baal theatre company from 1976 through 1981 and soon after became Head of the International Affairs Department of the Netherlands Theatre Institute until 1986, when he became Director of the Foundation for Cultural Exchange between the Netherlands and the USA. In the 90s he became a freelance consultant before returning to the Theatre Institute until 2000.

Below are some extracts from Rudy Engelander’s interview – a full account of the topics covered in his interview can be accessed at Ruud Engelander Topic List page.

The nature of collaboration within the  Pip Simmons Theatre Group c.1974

‘Then, of course, the actors [of the Pip Simmons TG] were asked to come to Rotterdam and work on these shows with them – they could say yes or no. If they said yes, they were involved in every aspect of it. I mean, Pip – he never directed in the sense of do this or that – he gave great responsibility to the actors to fill in in whatever they were doing… and he would look at the total picture and the pacing. But actors have always had a great independence in this work. Scripts emerged – I mean both production and script emerged, [it] was developed, while going along really..
Listen, he was the final arbiter of everything there of course – the theatre group was called Pip Simmons Theatre Group, you know, I mean as simple as that …. And everybody enjoyed it because they knew that working with him they would have a great time and would probably make some work that’s worthwhile performing.’

Evolution of the Mickery Theatre