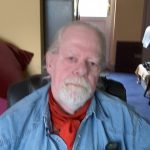 Bill Bailey is an American actor, based in Britain since the early 1960s. Born in  North Carolina he appeared in some of the first productions of what was to become Inter-Action’s Ambiance Theatre Club including ED Berman’s Super Santa and The Nudist Campers Grow and Grow, scandalising the press when he and Marie Adams (nee Aberg) walked naked across Hyde Park to the Ambiance Theatre in Queensway. He also appeared in And These Is Not All by James Paul Dey with The International Theatre Club Ensemble. He has performed in a wide range of theatre from the Bush to the National and West End. In the mid 1980s, he joined the Miners’ Strike, started an ad hoc theatre group called Rising Gorge and wrote a play Strike ’84 which was presented at miners’ welfare centres during the strike, especially in Durham. A writer with seven published books to his credit – mostly fiction – and is working on his 19th.

Bill Bailey was interviewed by Unfinished Histories in 2016.