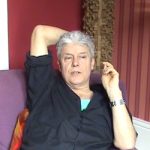 Patrick Barlow is an actor, playwright and director, especially associated with the role of Desmond Olivier Dingle – Artistic Director of the delightfully silly National Theatre of Brent. After graduating from University of Birmingham he met Ed Berman and joined Inter-Action. Initially a stage-manager with Ambiance Lunch-time Theatre, he was soon performing and working in multifarious roles on most projects including Dogg’s Troupe and The Fun Art Bus. After Inter-Action, he ran Theatre-in-Education teams at Duke’s Playhouse and then co-founded Solent People’s Theatre. In 1980 he founded the National Theatre of Brent with Julian Hough – their first performance being The Charge of the Light Brigade. This spoof theatre company – consisting of only two players – achieved huge success in upwards of twenty eight shows specialising in epic subjects such as Wagner’s Ring Cycle and The Messiah. The concept was adapted by Barlow for radio and television. Beyond the role of Dingle, he has appeared in many films including Shakespeare in Love and Bridget Jones’s Diary. As a writer, he adapted John Buchan’s The 39 Steps for the stage where it ran in the West End for over five years, winning a clutch of awards and unexpected international success. More recently he has adapted Ben Hur and A Christmas Carol (both 2015).

‘I was taught by a man called Clive Barker, who was an ex-Joan Littlewood person. There was a group of us there who got interested in theatre as a social thing and rather snotty, we were very snooty about West End and commercial theatre, and we wanted theatre that you could use for social ends and political theatre and so on – theatre as a service, really. We got very interested in that, there was a group of us. And Clive, who’d worked with Joan Littlewood, and was left-wing and very interesting and very feisty – he was a real bit of an inspiration, really. He said when everyone was going, ‘Oh, what are we going to do when we leave, what job…?’ and people were writing to Rep companies and sending in their photographs – he suggested we all go to meet this guy called Ed Berman in North London. This is ’68. It all sounded interesting: ‘Go and see Ed’, he said, ‘Ed Berman is interesting, he’s doing some interesting stuff’. So we all got in, I had a car then – I still do have a car, but it was quite unusual to have a car in those days – and I had a little mini, and it was me, Barry Kyle, Tim Curry – we were all at university together – and Judy Lowe, who is Kate Beckinsale’s mum, we all got in my mini and we all drove down the M1, which was only just opened I think, to meet Ed, in this shop opposite the Roundhouse. For a moment we thought it was the Roundhouse, coz the Roundhouse was run by Arnold Wesker in those days, but opposite was this little tiny shop. Anyway in the shop was this big bearded American with a red plaid shirt and these strange blue glasses. I’ve never understood – we didn’t have an audition, we didn’t have an interview, he just said, ‘Great, great’. He told me I was incredibly talented after about a minute, and of course I was completely wooed by this. I was really interested in it, and very intimidated by him. And as I said I had no self-esteem at all, I’d written to Reps, Repertory companies and nobody had even written back; I think I’d had one interview. And Ed picked up on me, and he picked up on all four of us actually, and he said, ‘I’d like you all to work here’, and I think he’d even got some money. He said he could pay us, I think it was about £7 a week or something…I don’t know where he got the money from but it was certainly more than you… kind of, you could live on that – well, accommodation being a sleeping-bag in the back of the shop. It became Belgo ultimately [the shop], I think they’ve closed down as well now. I don’t know where he got the shop from but he had this vision; he said, ‘I’m gonna have artists and actors, and we’re gonna work with the community and we’re gonna have kids in here, and we’re gonna have a street theatre troupe, and we’re gonna run a lunchtime theatre gr…’ – none of which existed, but he had, he just – it sounded just fantastic. And we were looking around this empty shop going, ‘How…When’s this gonna happen?’ But that sounds too cynical: I just Believed. I mean I just thought it all sounded wonderful, this was exactly what I wanted to do.’

Games Sessions as the starting point of Inter-Action work

Links:
Most of the 1985 Channel 4  series The National Theatre of Brent in Mighty Moments From World History are available at You Tube including Lawrence of Arabia