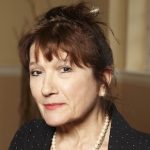 Director and co-founder of Blood Group

Below is an outline of the topics covered in our interview with Anna Furse in 2013, recorded to assist with the construction of the Blood Group company webpage.

Interview content includes: Anna Furse (AF) asked Suzy Gilmour to join her in forming Blood Group, 1981. Ran until 1986. Anna Furse couldn’t find an outlet for the work she wanted to do so formed own company. Wanted to find a language for ‘feminine unconscious’ about how women were felling at that time and how it could be translated into performance form. Central company themes – violence and power. All work devised (except Clams). ‘Women’s physical visual theatre’. Work at Rose Bruford at same time. Designer Kate Owen. Projects developed over a long period. Usually toured over a year, London, UK & Europe. Worked collectively. Project-based company. Lot of support from Oval House. A Barricade of Flowers. AF choose topics to be developed. Deborah Levy’s Clam; Dirt; Cold Wars. Company finished when AF became Artistic Director of Paines Plough. Ventriloquies; Nature.