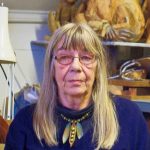 Liz Leyh is an artist, maker and community arts activist currently active in the UK. She was born and raised in Utica, a city located between New York and the Canadian border, to parents who were factory workers of Polish immigrant stock, Liz was sent to a local art school as a 6-year child, which she loved, starting with painting and drawing but by age 8 working in sculpture. Aged 16, in 1961 she went to University to study art on a scholarship, in spite of both grandmothers disapproving of girls going to university. Resisting some of the more bizarre trends of the New York art scene, she focused more on experiences directly relevant to her life as an artist and as a mother, and was active in political publications for the New York Seaman’s Union. She also worked as an art teacher in a unit for young people in the criminal justice system. In 1967 Liz moved to England, now married to an English merchant seaman, and after some time in London moved to a boat in Shoreham by Sea on the south coast. Inspired by a dreary primary school playground used by her child, she offered to make a crocodile sculpture for kids to play on. In Shoreham she encountered the pioneering arts activist and founder of the Inter-Action project ED Berman, who was running group sessions at the same Women’s Institute Liz was working in. This led to a productive period working on community theatre, and arts-based projects, some as a theatre designer, some creating hybrid theatre and making projects such as Make A Circus and A Day at the Seaside. At ED Berman’s suggestion Liz applied for a post as a community artist funded by the Arts Council in the new city of Milton Keynes, where she was active as an artist and teacher. This resulted in Liz’s most famous work, the so-called Concrete Cows of Milton Keynes. Liz is still active in teaching and working in the arts-in-mental health field.

For further details and images see the Inter-Action web page.
Below are some extracts from Liz Leyh’s interview, a full account of the topics covered in her interview can be accessed at Liz Leyh’s Topics List page. Liz Leyh was interviewed by Unfinished Histories in 2016.

‘I got the idea of working with concrete – actually that crocodile I mentioned at my son’s school – one of my neighbours on the boat [where she lived in Shoreham by Sea] and very good friend was Brian Behan, brother of Brendan Behan. And he was working on building sites at the time and I asked him to come and help me mix concrete to put these rocks in situ, because we’d got perfect rocks for the crocodile’s back, you see. And when I saw how concrete was mixed I knew then and there that children could do that. Not with shovels or concrete mixers but with trowels. And, literally, I watched Brian mix this concrete, and I thought well if kids sat around a huge pile of sand, each with a trowel, they could do that easily. I didn’t do it then but I knew that could happen. And then Brian invited me to come to the building sites he was working on to watch concrete being made. And I actually worked – well I tried! – you know, on his building site, watching these guys mix the concrete and – Brian taught me everything I knew about concrete.  It’s a wonderfully plastic material for children to work with. It’s almost like clay when you’re putting it on – I mean, I devised this method where if you got hold of rubble and made a pile of rubble. Like a nice pile. You could literally cover it with enough concrete, each kid, it doesn’t matter where he puts it, the motor control doesn’t matter either, of the children, because it doesn’t…you know if you’re covering with trowels a pile of rocks, you know you don’t have to be good at it. You just have to keep the concrete on the trowel, you know! Which most kids manage to do. All kids manage to do.  I’ve done marvellous things with disabled children, yeah!   And also  – I found this particularly in England, children really identify ( because I talk to them, I have to teach them that cement powder’s dangerous, you just can’t throw it around, don’t breathe it, whatever) when we’re talking about concrete they know that paving slabs are made of concrete. They know about brick-laying – or they did anyway! I remember once I was doing a sculpture in York at a school and this child looked at me and said ‘This is like building York Minster’. They associate concrete not with art. It’s not like paint, and the art-room, you see. It’s like ‘grown-up stuff’. They’ve only ever seen men mix concrete. Do you see what I mean? They identify this concrete with adults. So its another level, especially with 8- 9- 10-year old boys, they love the idea of mixing concrete because…how many people have they walked by in their lives in the street and watched mixed it? And they’re never allowed to, you see, so suddenly they’ve been given this serious stuff to work with. Not just paint in the art-room so to speak.

A Day at the Seaside