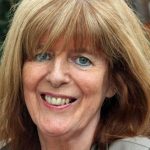 Ros Asquith was born in Hove and grew up in London She studied graphics and illustration at Camberwell School of Art before getting a job with Inter-Action as graphic designer in 1972.  She worked on the Fun Art Bus, drawing cartoon on the upper deck. She rapidly became involved in other aspects of the work, living in the Inter-Action commune and taking part in group games and in the Father Xmas Union and Dogg’s Troupe events. She designed the set for Dogg’s Troupe’s 10-Minute Hamlet,  produced tape-slide synchronisations for kids, and became the company’s official photographer at the Almost Free Theatre. At the same time she produced her first book of cartoons and sold them on the streets. Her photography work  led to  commissions from The Observer and, when the reviewer failed to turn up on one occasion to doing the writing too. She began work doing Theatre Listings on Time Out, graduating to theatre-reviewing and moved with many others to form the new City Limits after Time Out staff went on strike over the end of equal pay agreements. She has continued to work as a cartoonist as well as to write extensively for children, especially teenagers producing numerous well-known series including Teenage Worrier, Fibby Libby, Girl Writer, Trixie and Letters from an Alien Schoolboy as well as numerous picture books. She has been drawing regular cartoons for The Guardian for over 20 years.

‘I was urgently in need of money as everyone is when they have just been a student and so I answered lots of advertisements for jobs, and Inter-Action was advertising for a graphic designer, so although I really wasn’t terribly good at graphic design because I had been mainly drawing and taking photographs, I applied. But I had got an advantage in that I had done quite a lot of photography and they wanted someone who could do photography as well as programme design, and the odd drawing actually, which I did in fact end up doing for the Fun Art Bus. So I applied and I was accepted and you know we were getting I think it was seven quid a week, which even then was nothing really. There was a row of condemned houses in Kentish Town that the council had let Inter-Action use and we all lived there and we all cooked once a fortnight, which is my ideal way of living so you don’t have to think about it for the rest of the week… it was a fantastic rota and there was a vegetarian menu and an ordinary menu and ED Berman, who ran it only ever did hot dogs, so that was a very good way to live and although my first room there was a very, very small room, painted entirely brown including the ceiling, I moved to a slightly better one soon, and also I got the piss taken out of me a lot at Inter-Action because you know I was quite middle class as you can tell. They thought I was  the silly posh girl so I ended up doing all the washing up for a week the first week, and then ED actually found me in the kitchen scrubbing a dish after about a week and he said: Why are you doing that?’, and I said:  ‘Oh well, you do that in your first week’, and he said, ‘Oh no you don’t’. So I was like the typical person sent out for a bucket of checked paint.’

Detailed Topics List of those covered in the interview
See Viewing Interviews for details of where to view the whole interview
View our Fun Art Bus video here.