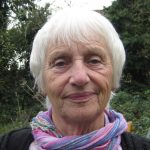 Sarah Evans (now Guthrie) became involved in theatre by chance after she started working on an early London listings magazine Theatre Perimeter in 1964  and met friends Australian Bryan King and Paul Adams, who persuaded her to set up London’s first lunchtime theatre with them. She became co-director (administrator) of the first lunchtime theatre in London: Theatrescope Original Lunch Hour Plays which operated from 1966 to 1968 at the Little Theatre Club in Garrick Yard, off St Martin’s Lane, putting on professional one-act plays twice a day, five days a week. They collaborated with Ed Berman‘s Inter-Action to do lunchtime theatre at the Ambiance cafe. Later, Sarah educated her 4 children at home and was a founder member of the national movement Education Otherwise. She is a cartoonist whose work has appeared in publications such as Red Pepper, MsLexia, Prospect, Ethical Consumer and Peace News. She and her husband Brian Guthrie run Screen in the Barn, a cinema in their garden, where they have also staged plays by local women writers. She works with young asylum seekers.

Brian Guthrie, who contributes to this interview, was stage manager for Theatrescope and later the Ambiance.
Gallery images are taken from Sarah Evan’s scrapbook kept at the time

Genesis of Theatrescope Lunchtime theatre
‘Theatre didn’t really form part of my life at all but what I did was, I went to Paris as a student, and there I met some interesting people who were already vaguely connected with theatrical projects, and when I came back from there I got a job working with my friend who I had met in Paris, and we were running a very early form of Time Out which was called The London Playgoers Club, it sounds very grand, but actually it was in a flat in Bayswater.  This would have been 1964 and we worked for a very eccentric guy [Robert Sheaf] who had himself a background in putting on plays and whipping up all kinds of drama and theatre and taking plays to outlandish places anyhow, not fantastically successful but, he then wanted to start a guide to London theatre and he ran it all from his little sitting room on one of those old duplicating machines, and we produced a monthly guide to West End theatre and what he called ‘theatre perimeter’, which was all the alternative theatre.  People could join the club and get discounts on West End prices and also get information about what was on the fringe…So that was beginning to be a kind of interesting area for me because he started taking me to the theatre and my eyes started to open and I started to think about the whole thing.  Anyhow to cut a long story short, the two people I worked with, Bryan King and Paul Adams, came to me one day and said, look let’s start a lunchtime theatre. Now Bryan King was Australian and he’d worked at the Little Theatre in Melbourne where they had a lunchtime theatre and of course it didn’t exist in our country at all, but he said I want to start one here, let’s leave Robert and go into this.  So we did.’

Setting up and running Theatrescope’s lunch-hour theatre at the Little Theatre Club, 1966-68