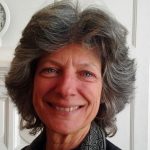 Julie Holledge was born in the London suburbs and studied Drama at Bristol University. Her desire to work us a director led her into performing in TIE attached to the Northcott, Exeter where Jane Howell was Artistic Director. She went on to work with a series of radical companies including Belgrade Coventry TIE, Broadside Mobile Workers’ Theatre and Recreation Ground, while simultaneously enrolling for a PhD at Bristol. Her research on women in the Edwardian theatre and the Actresses Franchise League led her to explore the work of women playwrights of this era work in production first through Sidewalk Theatre and then with Mrs Worthington’s Daughters. She also helped spearhead campaigns in Equity to improve women’s rights and a Feminist Theatre Study Group to challenge stereotyped representations. She went on to direct with Women’s Theatre Group where her shows included My Mkinga, Soap Opera, Breaking Through and The Wild Bunch and where she developed a design collaboration with Mary Moore, who became her partner. She moved to Australia initially for three months to direct feminist theatre but went on to settle there becoming Professor of Drama at Flinders University where she developed the major AusStage web site project.  She is now also attached as Professor II to the Centre for Ibsen Studies at Oslo University, doing cartographical research on productions of A Doll’s House worldwide.

‘I think what happened was, that there was this sense, I felt, even having done the bit of women’s work, that this was the politics that I was really interested in, this therefore was the theatre I was really interested in, what models existed and, going back to Bristol, I’d gone through a fantastic university education  –in which I’d been taught only by male academics.  I mean, okay there’d been visitors coming in like Jane [Howells] or the woman who taught us Laban, but in the academic staff — all male.  There was a woman who taught costume and technical theatre, but she wasn’t in a sense one of the conventional academics, not one of the lecturers you know, –she was on the theatre side in the way that we would have had people from the Old Vic School where you would find some women, but in terms of the intellectual education, it was all male. The syllabus was totally male. I don’t even think we talked about a woman playwright in the three years. We didn’t talk about any [women].. maybe Joan Littlewood got mentioned but that was it.  So it was a totally male curriculum, all the theorists were male, everything was male.  So when you started thinking you wanted to work, make women’s theatre, you just didn’t feel you had any [role models]… you were lost.  You know you were trying – you were reinventing the wheel, and I know that when I decided I wanted to do the PhD it was in my mind I wanted to do a piece of feminist work and I’m sure that must have come from meeting those women at the Leamington Spa group [Leamington Spa women’s consciousness raising group].’

Bibliography:
Plays directed by Julie Holledge include:
with Mrs Worthington’s Daughters:
The Oracle by Susannah Cibber, J. Roberts, 1752
In the Workhouse by Margaret  Wynne Nevinson in Votes for Women and Other Plays ed. Susan Croft, Aurora Metro, 2009
Aurora Leigh adapted from Elizabeth Barratt Browning’s poem by Michelene Wandor in Plays by Women Vol. 1 ed. Wandor, Methuen, 1982
with Women’s Theatre Group:
My Mkinga (devised with Kate Phelps, on contraceptive dumping in the developing world)
Soap Opera by Donna Franceschild (unpublished)
The Wild Bunch by Bryony Lavery in The Wild Bunch and Other Plays ed. Don Shiach Walton-on-Thames: Nelson, 1990
Breaking Through by Timberlake Wertenbaker (unpublished)
Elsewhere
How the Vote was Won (and others) by Cicely Hamilton and Chris St John, in Votes for Women and Other Plays ed. Susan Croft, Aurora Metro, 2009
Tap Dance on a Telephone Line  by Donna Franceschild (unpublished)
Writings by Julie Holledge include:
Innocent Flowers: Women in the Edwardian Theatre The Women’s Press, 1981
Women’s Intercultural Performance (with Joanne Tompkins) Routledge, 2000
‘What did the Actress Say to the Director?’ in Spare Rib, Aug 1978

Back to Interviewees A-F
Back to Individuals