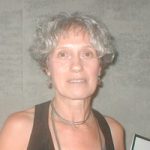 Libby Mason grew up in the London area and did a BA in English and Drama at Hull going on to work in T.I.E. in Leeds and with Belgrade Theatre, Coventry, before joining the political theatre collective Red Ladder as a performer. She then freelanced as a director, especially for Women’s Theatre Group where she co-wrote two shows with the company Double Vision  (1982) and Dear Girl (1983) and worked with Gay Sweatshop. She directed shows by Noel Greig for Perspectives Theatre Company and later for Theatre Centre, where she became Artistic Director from 1986-1992, developing new work by young people and plays by Sue Frumin, Colm O’Clubhain, Julie Wilkinson, Lin Coghlan and others. She moved to Canada in the early 1990s where she has worked extensively as a director, teacher and dramaturg, including as Artistic Director of Shakespeare in the Red, training First Nations performers in approaches to Shakespeare. She now teaches theatre and other subjects at the Lester B. Pearson College of the Pacific near Victoria, BC.

‘I think both of those pieces [Double Vision and Dear Girl with The Women’s Theatre Group] were really unusual, and unusual in a way that only collaboratively written pieces could be. I think I wrote that in the introduction to Double Vision when it was published, it’s that, yes, it’s great to respect the skill of a writer, but there’s something – there’s some very, very special qualities that come out with collaborative writing, or collaborative writing processes that you just don’t get from one writer, and that some of those things are precious and unique and wonderful. I remember, this is a silly thing, but I remember in Double Vision, Hazel’s [Hazel Maycock] character had this line, she was arguing with her lover and she suddenly went, ‘I hate this sweater’, she said, ‘I hate this sweater its…it’s oppressive’. Now I can’t imagine – that’s Hazel you know, that’s Hazel improvising – I can’t imagine a writer saying, ‘I hate this sweater, I hate it!’ you know what I mean? So there are certain things that are really idiosyncratic I think, that you can get through working in a very, very collaborative process.’

Best of Friends by Noel Greig