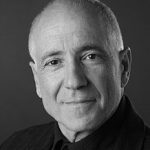 Emil Wolk (1944-), born in Brooklyn, emigrated to England when his father became principal baritone at Covent Garden. Educated in England and Holland, Wolk struggled with dyslexia and the structures of both traditional educational institutions and script-based theatre. Circus training and mime-based physical theatre transformed him after his acting studies at Cardiff College of Music and Drama and work in repertory at Belgrade Theatre Coventry. Wolk was in Paris in 1968, then returned to Edinburgh and London, where he worked with Incubus and Edinburgh Theatre Workshop among others. In 1974, he joined Pip Simmons Theatre Group for three key shows: Dracula, the landmark An Die Musik, and The Dream of a Ridiculous Man. Wolk’s partner in the 1970s, aerialist Paula Melbourne, in particular linked him to experimental, physical, circus, and vaudeville ways of working. They were among the early members and teachers of Suitcase Circus, teaching in the Edinburgh Summer Circus School in 1977. After her tragic early death, he collaborated more with the People Show and the Freehold. Since the 1980s, Wolk has moved between alternative and mainstream, performing and directing in film (The Tall Guy), television (Rake), and opera, as well as Circus Oz. In 1988 he won an Olivier Award for his performance in Kiss Me Kate. He moved to Australia in 2005 and now makes his home in Port Macquarie.

Below are some extracts from Emil Wolk’s interview – a full account of the topics covered in his interview can be accessed at Emil Wolk Topic List page.

‘There was also the social gatherings like at Sutherland  Avenue and with Mark Long [People Show] and we’d meet in the pub, you know we might go, Dinah Stabb was partner to Mark, and so when working with the People Show we might go back to Sutherland Avenue to the pub there and I’d see Mark. You know there was this social life that was also occurring….(Interviewer: and you said that you worked with Paddy…) Paddy Fletcher … and that was through the Oval House… he invited me to Rotterdam and I did the Hecken [The Madman] and I think that’s maybe before, and then he wrote part of the Feast of Fools piece. (Interviewer: That was a kind of Arthurian type thing was it?) The idea was that they were all off to the crusades, it wasn’t Arthurian it was like the crusades, yes so, so it was the big banquet before they sent off all these poor sods to the crusades, so you had –  even in the sense of the audience – you had those that paid more money for tickets would get the table seats where as all the hoi polloi would be… and you know it was wonderful audience involvement and it went to the Round House and it worked quite well there but it’s just like, its nothing quite like when you first do things [it originated at Oval House]. But you know they were groomed at least at the Oval -there were those that had gone to have classes and workshops and then became professionals in their own right because of the impact obviously that people had on them and on what they saw and so there was that kind of level of involvement of people that were not yet professionals or were part of the workshops, were coming in to the neighbourhood because of the Oval…(Interviewer: I think Pierce Brosnan was started out he was working in an accountancy office, or something like that …) I think so, he had a wicked sense of humour. I remember he was in one thing , when he had to come to a bar –  it was a bit like I Did It My Way –  I don’t know if it was playing at the time, and he tried to roll a cigarette, he was looking – cos he is ultra-cool anyway, that’s why he did Bond, there’s something about him that is very Irish, and wonderfully cool – and he couldn’t roll this cigarette, it was so funny, I was in fits.  There were  the kind of elements of people that you saw, that actually they never used when they became professional, and yet you’d seen… his bull-fighter [ref. to The Matador that PB played in at Oval House]– his matador for instance in this cape, there was broad comedy.’

The Dream of the Ridiculous Man

Emil Wolk was interviewed by Unfinished Histories in 2015.