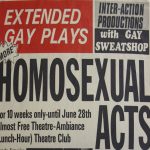 This event took place on 15th February 2015 and sold out.

A limited number of tickets to the gig by Siren only (in the Arcola Bar at 10.00.p.m. ) were available on the door at £6 each or can be reserved by emailing: contact@unfinishedhistories.com

If you would like to make a donation to help support our work, we would be very grateful. 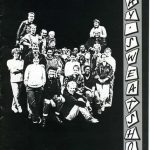 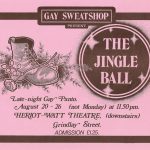 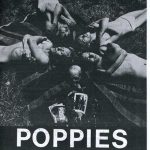 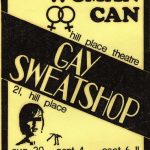 On 3rd February 1975 the Almost Free Theatre in Rupert St, W1 staged the first performance of Limitations by John Roman Baker, the opening production of what became a seven show extended season at 2 venues, with queues round the block and launched the 22-year career of Gay Sweatshop. As the first touring lesbian and gay company Gay Sweatshop faced down outrage and calls for venues to be closed down, but met with enormous hunger from audiences who had never seen their lives represented onstage as valid and positive. Campaigning plays on custody battles of lesbian mothers or the gay male age of consent contributed to changes in attitudes and in the law. The company nurtured new writers, directors and performers and created a body of work that is moving, provocative, compassionate and celebratory and deserves rediscovery by a new generation.

The Event
The Benefit, called like the original event, Homosexual Acts,  consisted of a series of talks, staged readings of play extracts, music, video  and projections, celebrating the history and honouring those who were part of it who are no longer with us. A major part of the evening consisted of extracts from some of the key plays performed by Sweatshop over the years. We will feature both the early work from the 1975 season such as  Ships by Alan Wakeman, Passing By by Martin Sherman, the new pieces that followed it in 1976: Mister X by  Roger Baker and Drew Griffiths and Any Woman Can by Jill Posener, and some of the many plays that followed such as: Care and Control by Gay Sweatshop Women’s Company, As Time Goes By by Noel Greig and Drew Griffiths and Twice Over by Jackie Kay.
The evening rounded off with a performance by the wonderful and recently re-formed Siren, lesbian feminist women’s band.
Compere: Neil Bartlett. Commere: Lois Weaver
Participants included Simon Callow, Martin Sherman, Alan Wakeman, Alan Pope, Tash Fairbanks and Adjoa Andoh.